Early Surface-Effect-Ship SES designs experienced problems with the “cobblestone” effect, which produced high vertical accelerations in low sea states at high speed. The “cobblestone” phenomenon is a resonance effect due to the compression of air in the air-cushion. Activation of RCS substantially reduces “cobblestone” effect, offering a much smoother transit for passengers, with documented reduction in seasickness. This in turn, results in more efficient operations of service technicians at offshore installations.

Once a vessel approaches a wind turbine, another vessel or offshore installation, BCSTM is engaged. As a result, air cushion pressure is actively controlled to counteract wave forces. The air flow in and out of the air cushion is controlled by ventilation valves. When buoyancy of the hulls is increased, the air is ventilated from the cushion, reducing the air pressure. When buoyancy of the hulls is decreased in a wave through air pressure is increased to compensate for lost buoyancy, assuring a safe and simple ‘step-off’ to an offshore structure.

The two modes are easily switched to required operating mode, either Transit or Boarding. 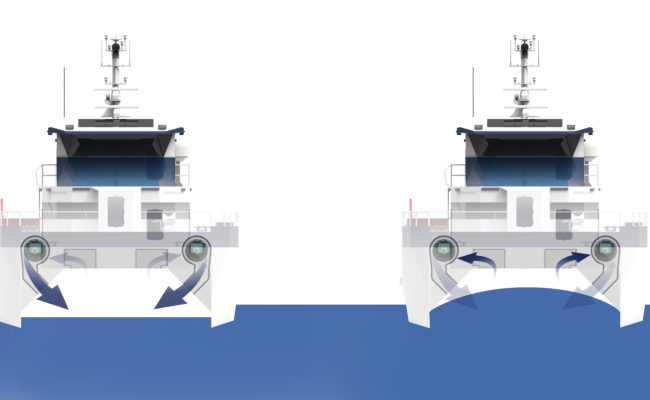